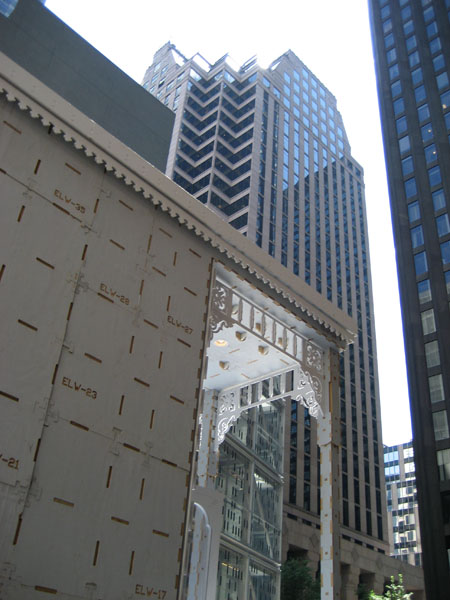 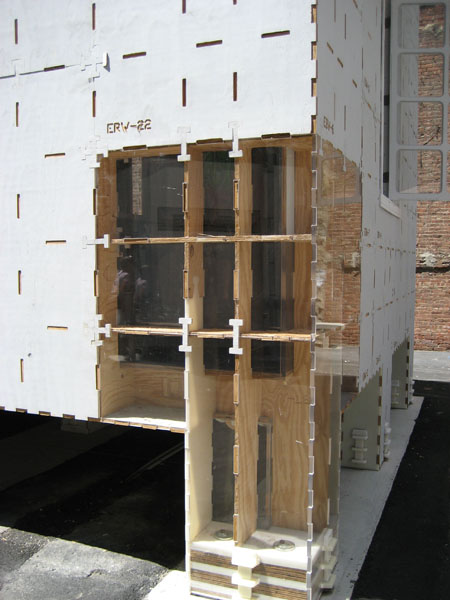 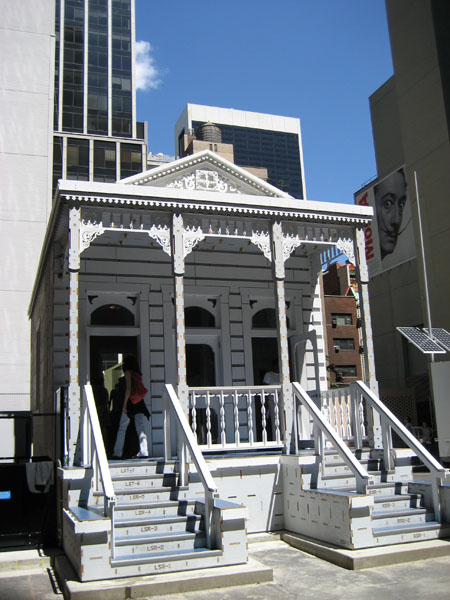 I’ve been to the Home Delivery show at MOMA twice on sunny weekends this summer. The show on prefabricated architecture is overall well curated. However, the true brilliance of the show is that they have full scale models of six homes. The all steel Lustron house is in the indoor portion of the exhibit. The others five are constructed in the parking lot next store to the museum. Architecture exhibits rarely show full scale buildings for obvious reasons, which relegates museum shows to drawings and models. Normally, to see architecture you have to go to the actual sites, which makes comparing structures challenging. But here, you get to experience multiple examples at full scale.

Of all the architects that were invited to show, the most remarkable was Housing for New Orleans, designed by Larry Sass of MIT. He researches new fabrication techniques using CAD and digital laser cutting. His houses are constructed from numbered jigsaw-like pieces which can be assembled with a rubber mallet, hot glue, and the occasional crow bar. The first prototype took five students to build over two days, however this example was erected with three people over two weeks. The individual pieces are small as compared to the normal two-by-fours that are normally associated with building houses, as seen in the details images. This iteration of his research 196-square-foot one-room shotgun house for post-Katrina New Orleans . The application of his techniques to the housing crisis caused by Katrina is also noteworthy, especially as related to my interesting in ethical design and prefab architecture.

Sass’ impressive approach to architecture comes from a completely new starting point, that is born digital. The designs are created using fabrication and cutting techniques which utilize the strengths of computation for something greater idea. Despite this use of technology, I was reminded of Japanese Shinto Temples, which use a centuries old technique of interconnecting wooden joints that do not require nails.

Unlike much of the work of say, Gehry, computation is not used to build once impossible complex structures. Rather, Sass’ research seems to be more about rethinking how to one goes about building a house (Housing for New Orleans, could be build without the use of computers.)  In his House for Katrina, there is a balance between shelter and ornament. The structure provides protection from the elements, while the flourishes still invoke local styles and nod to the human need of aesthetics and having their home relate to an surrounding architectural context. Although, I’m sure many people feel the ornamentation (and the structure itself) is a poor substitute to the grand architectural styles of New Orleans, there are limits to the not only his construction methods, but also what can be reasonable built during disaster relief.

Weeks later, I’m still thinking about the relationship between computation and architecture, and how Sass both makes architecture more abstract and more concrete. The abstraction comes from the reliance of the computer to design and cut the material. However, in the actually physical act of building, the methods allow a few people (instead of a team of builders and suppliers) to construct a house with a minimal set of skills and tools. Computation’s ability to make something simultaneously abstract and concrete is not all that new, but I’ve never seen the idea applied to architecture, which makes the discovery all the more exciting.

Twitter
This entry was posted in design, ethics of design, innovation, review, Uncategorized. Bookmark the permalink.