The Value of Print 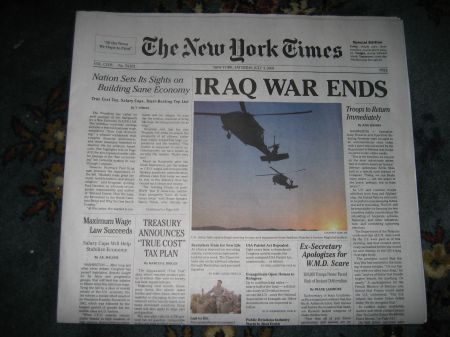 On November 6, I didn’t run out to buy a paper. I thought about it for a second. I decided that I have more than enough stuff and because newspapers aren’t archival. Because they are designed to be disposable, newsprint disintegrates over time. I asked myself, “why bother?” When the paper eventual would turned brown and brittle, would I ever want or try to read it? Or would I just log on to nytimes.com and look it up? Of course, then I thought, what nytimes.com look like in 20 years.

Not that it matters, because the newspapers sold out all across the country during all this thinking. And I more concerned about getting a train to Philadelphia.

In retrospect, it’s interesting to observe in a time when newspapers are shutting down and laying people off, on the day after a historic election for many reasons, people still wanted to sought out the newspaper as a physical token of the event.  A copy of the New York Times apparently sold for $400, not a bad return for a one dollar investment in less than a week.

Did anyone bother saving a screen shot of the New York Times website for November 6th?

I wonder if the selling out of print newspaper was a generational phenomenon. Did Millennials, the so-called redubbed, Generation O, view this edition as someone to save?

On Wednesday, November 12, I was lucky enough to pick up a copy of the New York Times Special Edition. The parody issue of the Times dated July 4, 2009, with articles full of a hopeful future. (I wonder, however, what the Yes Men and others had planned if Obama had lost.)

This elaborate campaign took months of planning and reportedly hundreds of volunteers.  It seems that they will someday be collector’s items, according to Alex S. Jones, who wrote a book on this paper titled, “The Times.” Score one for ironic outcomes.

We, as a culture, still value scarcity. My newsprint copy is worth than my screen from nytimes-se.com. The vessel is worth paying for, but the content is not. Now the two have been irreparably divorced. And we want and expect the content to be free.  However, there are times like the 6th and 12th of November 2008, that we found ourselves returning to treasuring the vessel.

For those two days, we were back to the 20th century, where people sought out the print newspaper.

What this its last hurrah?

Twitter
This entry was posted in culture, design, information, Uncategorized. Bookmark the permalink.