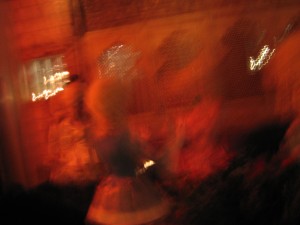 2008 has been a rocky ride. I could write about a year reflecting on the changes of the guard… industries failing, fortunes made and lost, seismic Presidential shifts, passing of torches at the Olympics. We’re entering 2009 with lots of uncertainty. But instead, I’m just going to quickly post about how this occasional blog, is going to become even more occasional. Instead of the overhanging pressure to “feed the monster” I’d rather use my time work on other stuff without the self-imposed guilt of “I should be blogging.” So, the change is more a mental re-defining for myself than anything else. Anyway… maybe the frequency won’t even change… because I’ll still use this site as a staging area for some of the other things I was meaning to work on in 2008. 2009 will be year of getting the half done project out the door, wish me luck.

Anyway, this photo is from a party a few months… it has nothing to do with the post, just your standard blurry flickr photo.

Twitter
This entry was posted in Uncategorized. Bookmark the permalink.