The Politics Of The Designer. 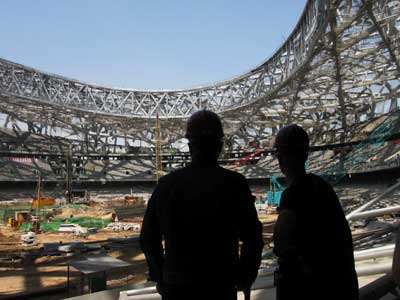 In the post-Olympic, millions of people saw daily images of the Bird’s Nest and Water Cube (designed by Herzog de Meuron and PTW Architects, respectively) which are impressive structures that are now forever linked to the 2008 Olympics. On these grounds, protest permits were denied. On the second week of the event, US art activists were arrested. Through these events, the relationship between architecture and their patron deserved continues scrutiny.

The debate was recently restarted with Daniel Libeskind’s announcement early this year that he would not design for “totalitarian regimes,” and especially pointed out China. Although, he has two commissions under construction in Hong Kong and Singapore, which leads to the question of how do you define China and how do you define a totalitarian regime. The underlying issue is more than just whether to build in China, but something larger.

What is the social responsibility of their architecture? Can you separate the building from its patron?

A New York Times article is full of money quote of influential voices in the field on the topic, as does an article by Matthias Korte, in sight and sound, also was thinking about the topic was back in January.

Barry Bergdoll, the chief curator of architecture and design at the MOMA cites the fundamental issue, architect want to get their buildings made. “It’s a problem as old as architecture and empire. Architects in the end are selling design services.”

Further, architect Peter Eisenman, notes the irony is working with a totalitarian regime. “The more centralized the power, the less compromises need to be made in architecture. The directions are clearer.”

However, quite often, architecture want to sidestep the issue. Robert Stern, dean of Yale’s architecture school is designing the George W. Bush’s library says “I’m an architect. I’m not a politician.”

Bernard Tschumi, former dean of Columbia’s architecture school, takes a balanced approached: “Some of the most amazing places were built because of dictators. Architecture is always related to power and related to large interests, whether financial or political… there is a moment when the buildings are conceived as an expression of a political regime. Then it becomes a problem. You have to believe in it.

Architects may not want to identify as politicians, although it is a common idea in Western architecture schools that their designs are agents of change, and influence people who experience their designs. Many of these same architects who make this claim, to fortify the importance of the designer, also try to avoid their political and social responsibilities. Architects then cannot be selective in their application of their effects on society, and therefore must be able to defend their selection of projects.

Twitter
This entry was posted in Uncategorized. Bookmark the permalink.