On November 5th, I noted an important turning point in my media, among all the celebration of electing Barack Obama.

I didn’t watch any of the TV coverage on election night. I just had a few websites open to track reporting from different areas. I mostly stuck to the New York Times, that had the best interactive map, and the San Francisco Chronicle to get some West Coast reporting on things like Prop 8. I could also easily compare what states the sites were calling (it’s not always the same) and focus the races of course interest, Al Franken’s Senate race in Minnesota, for example.

It was interesting to note how the newspaper sites covered when TV programs called races, as their round about way to report results early without “really” reporting results early. But shortly after 11:00pm, I was alerted that Obama won, just like everything one else who were glued to their television sets. 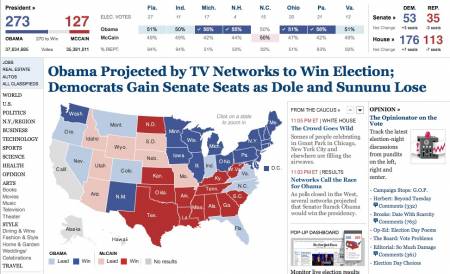 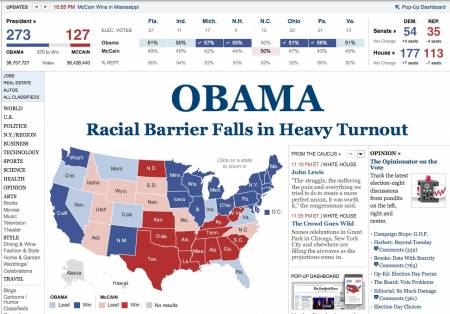 What did I miss from not having the TV on? Reporters, pundits, and anchors with often little meaningful to say as returns slowly are released. It was refreshing just to get the data. On the other hand, the decision also meant I had wait a whole day to learn about CNN’s Princess Leia Style Hologram.

One Response to Totally Late Post On A Post-Election Reflections