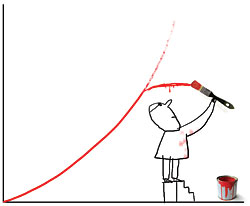 Noah Brier posted an interesting link recently to an article claiming that Metcalfe’s Law, which famously has been paraphrased to be the value of a network exponentially quadratically grows with each additional node, is wrong. This is a provocative thesis because the law is widely trumpeted in all that is good about the Internet.

In the theoretical long term view, networks with more nodes will encourage late adopters to join (and pay.) People often cite the instance of email, the rates of people setting up (and paying for) email accounts in the 1990s rose much faster after it was possible to communication with people outside a user’s ISP, being AOL, Compuserve, Prodigy, or an academic institution. However, network adoptions plays out differently in other cases.

The disconnect here may be that in the definition of value, more specifically value by whom. In the valuation of a network, the network of 100 is worth more than a network of 10. According to Metcalfe, it’s worth 100 times (10^2) the smaller network. For the consumer, it is clear that the value of the telecommunications network grows with each new person, especially if the costs for the user doesn’t increase. However, consider combining access of two competing networks from the perspective of the network operators. From this angle, the smaller network will clearly see more benefit than that larger network, as the article suggests. Further, both operators will see an increase in the costs associated with network traffic (from hardware to customer service,) with no new paying customers. If the operators are charging an unlimited usage prices, there is little upside to combining networks, which shows why network operators tend to resist interoperability. Why would a market leading operator take on additional cost with increased revenue and help a smaller competitor?

Coming back to the definition of value, the value of the network actually doesn’t change if the willing to pay (i.e. the ability to extract fees) from the customers of the network. I’m still trying to grapple with the difference between the value of the network from the customer versus the operator. That is, the problem is that as although the value of a larger network may grow, there willingness to pay by the customer does not. In fact, it may even shrink, which was noted in a MobileCampNYC talk by some smart folks at Air Arts last Saturday. Consumers have been conditioned to expect prices to fall, especially in the area of telecommunication services, even as nodes (and the value of the network) increases. Is the reason that customers don’t want to pay for that additional nodes because the new nodes are less valuable to the customer as the article suggests? Is it a matter of marketing conditioning from other services industries associated with the properties of the economics of scale that prices for services should go down over time?

Although the article was published last year, the valuations for networks will only receive more scrutiny after Facebook’s USD$15 billion valuation, which is about 25 times what News Corp paid for MySpace, which has more than double the users than Facebook. Expect more discussion to follow.

One Response to Is Metcalfe’s Law wrong?